For this week’s Friday news roundup, we’re talking interviews, Ko-Fi, recording and more. Learn about what we’ve been up to below!

Really enjoyed appearing on Kurt Sasso’s Two Geeks Talking, was fun to chat about the project with him. Have alook below to learn more about what we do.

So this may not be “news” as such in this part of the news roundup, but it is something I want to highlight. People often ask me about coming up with ideas, how to create a story etc. This is why I decided to do a video on character and story arcs (also look below for our creative tips playlist for a range of advice to help with a creative project).

This month we’re looking for fanart of villain characters. If you need some inspiration look at the videos below (Shoutout to our comic video producer/roleplay forum founder John Paul Guerra)!

Earlier in the news roundup we talked about a video I was appearing in, now it’s the other round as we have a trio working on our next big video. What is it? I want to leave it a surprise, but I do strongly recommend you read Reynard City Chronicles issue 2 before you watch it.

Huge thanks @ReynardCity for having us on to play! pic.twitter.com/svzqf8ZxKJ

Finally in the news roundup one of the big stories and one of the biggest shakeups we have recently done. Ko-Fi recently launched a shop option for their members and we opened one, giving people a place to buy both digital and print merchandise from the comic.

For those new to Ko-Fi, the idea is that people buy virtual “coffees” to support creative projects. The shop option also gives us another avenue to sell items and fund the project.

We have decided to cut the cost of the physical items we send out but on top of that all digital products (The AK Girl Collection, Perfect Platinum Collection, Reynard City Chronicles issues 1 and 2) are now on “pay what you want”, this means you can buy digital collections that were previously £5 for as little as £1 (though if you want to support us you can pay more, up to you)

A 40 page graphic novel and reboot from the original webcomic series, in this story local radio DJ Vibes McAllister learns she is actually Animal Kingdom Girl (or AK Girl for short), a superhero vixen with incredible psychic power (and a severe allergy to caramel.) What follows is a bizarre twist on a 90s cartoon story, with some oddball characters and over the top action, but never losing sight of the heart behind it.

On the surface, Sally Joanna Vixen (aka Wondervixen) looks like a striking, powerful superhero. But underneath it all lies a dark secret, something she has to tell Dr Antibiotix. Meanwhile, AK Girl and Wondervixen deal with flamboyant antagonist El Paso Grande, who seems to have a connection with Sal…

AK Girl Adventures features some favourite original webcomic issues starring the eccentric psychic supervixen, as well as some additional bonus stories and content you won’t have seen before. At over 100 pages, there’s plenty to enjoy!

Featuring one of our most popular issues (Jed Soriano’s Subconscious Pt 2), The Perfect Platinum Collection features the full arc of Wondervixen and her clash with this horrific robot villain. In addition to this, you get over 100 pages also featuring interviews on why people love the Wondervixen character, plus some addition bonus content.

Why we need your help

A little bit of maths for you. We have over 7000 followers on our Twitter page. If 10% of them gave £1, that would mean we’d have over £700 to work on this project, something that could make a massive difference and allow us to do a lot more with this project.

As well as Ko-Fi we also have Patreon where you can pay per month for a range of extras, everything from exclusive videos to a regular gift box sent to your home. Failing that, you can also donate via Paypal or if you have something you want to promote you can do it via one of our sponsorship packages.

We are incredibly grateful to everyone who takes the time to share our pages, put work into making the project real and does what they can to support us. This is why we have our special thanks playlist, so that we can credit as many people as we possibly can.

With your help, we will be able to give more commissions to artists, produce more merchandise with local businesses and work with more independent shops who right now need the support more than ever. If you would like to know more please use the contact form! 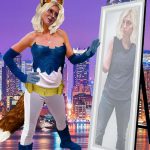