The End of Reynard City- Apologies for the clickbaity title but believe it or not this is something I’ve been asked about a few times! What we’re going to talk about is what the end of Reynard City means, when it will happen and what you need to be ready for!

The End of Reynard City – The final script

So first big thing to clarify- it’s going to be a while until we reach the end of Reynard City. Our aim has been to produce one 40 page graphic novel per year- issue 5 is due out this year, scheduled for September 2022 in time for Norcon (shoutout to Claude who’s working hard on this!)

In terms of the Reynard City Chronicles series, the series will end with a two part story covering issues 8 and 9. We have a while to go before then- if things continue on schedule then this will take about 4 to 5 years.

But what happens next?

So in a recent interview, the question that has come up a few times came up again- what happens next after the end of Reynard City?

In the immediate short term, I think there would probably be a bit of a break, as everyone has worked incredibly hard on this project and I’ve got no doubt we’ll keep doing this until it gets finished.

Another question that has also come up before is “Have you considered doing an animated series?”

We have not only considered it, it’s something we worked on- we were lucky to work with a great troupe of voice actors, artists and animators. It got to the point where we pitched it to a production company- but unfortunately we did not get picked up.

This was also the case with Reynard City as a video game- we did some work on this but it proved to be too much to take on with everything else.

First and foremost, I think the comic needs to get done. It would be great to have a complete story that people can pick up from issue 1 and get the ending to that story in issue 9. With regard to sequels, spin-offs etc, never say never but it’s not in my thinking at the moment (though I have had some people pitch me some cool ideas.)

In the original Matrix film, Neo says “I’m not here to tell you how the story ends but how it begins.”

I would love to get a Reynard City animated series. Having seen talk of Scott Pilgrim getting one (which is great!) it gives me more inspiration to get this out there.

While it’s great to get encouragement, the big thing is to not just say you’d like it to happen but to help make it happen.

What does this mean?

Fursuit and pic by Niz https://twitter.com/RedPandaNiz

1. Share the links- It’s free and it helps get us out there.
2. Subscribe to us on Youtube- A bigger platform means more exposure.
3. Buy the comics- The more we sell, the more people have to sit up and take notice (Available at our Ko-Fi shop, Beccles Books, Canary Comics, Bookbugs and Dragontales while you can pick up items at Eaton Post Office. Want Reynard City comics in your local shop? Ask them to get in touch with us reynardcity@gmail.com)
4. Back the crowdfunders- Patreon starts at just $1 a month, Ko-Fi and Paypal can be one offs. Regular funds allow us to give more money to the people that deserve it most, the artists!

Don’t get me wrong- I’m massively grateful to everyone already doing this and nobody has to do anything. But the more you support us, the more we can make things happen! 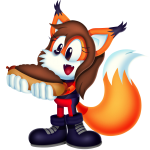 Thumbnail by Kenny The Koala