So for a while now I have posted videos on Youtube alongside John Paul Guerra’s comic videos. Recently I decided to experiment by doing a Youtube Premiere with one of our reviews and after doing it I learned a few things. Also wanted to update you on some other things that people have been asking about.

OK so I say what “we” learned, the more accurate term is what “I” learned. The first was that I should have done the Premiere later in the evening, as then it would have been ideal to draw in a lot of our regular fans/followers. A lot of people on the west coast of the US are six hours behind us, so in future any Youtube Premiere videos will reflect that.

Another thing I learned while doing the video was quite interesting- if you hit over 1000 subscribers and monetise your channel, then you can do superchats. This excites me as I think it opens up some interesting possibilities and would love to chat to our team (and others) about it, both in terms of an additional revenue stream and in terms of possible content (eg bringing in guest appearances etc)

Therefore I am asking if you can- please subscribe, preferably to both my channel and the comic channel because it helps support us, and also John has worked really hard on the comic videos and deserves your support!

Also if you have a Youtube channel and want to be promoted we have a sponsorship package where we can promote you through video shoutouts, social media and more from just £25 a month (more info here)

Shoutout to Gideon The Fox who is working on a Reynard City fan film in the WWE2K19 video game (I am a sucker for custom fighters in games, and this is truly awesome!)

Also inspired by this we’ve added a fan video playlist on the channel you can look at here as well (send us a link and we’ll add you!)

Another thing that I wanted to update people about was our Issue 2 cameo appearance package. We’ve had a few people enquire so I decided the easiest thing was to do a Twitter thread covering most of the issues people asked me about. If you are interested but still have questions feel free to contact us

We've had some enquiries about our issue 2 cameo package so wanted to clarify a few things. First up the package is £100 and there are three slots available (first of four bought by @rev701 thank you very much!) https://t.co/bD9w6B1Kzl

For those of you who missed it, you can find more gift ideas in time for Christmas (as well as birthdays, corporate gifts, Secret Santa etc) in this blog here

As a recap our options include comics (both print and download), prints, badges, coffee, chocolate and more, as well as commissions from artists. If you would like to see more and get some ideas head over to our shop

A big thank you to Rev701, who as well as being a regular Patreon backer also backed our Indiegogo and got the first slot from our Issue 2 cameo appearance package. Also massive thanks to all our sponsors, backers and everyone who has bought a copy of the comic or supported us in general, it really means a lot, thank you!

Also it’s Charity Tuesday, so here is a quick shoutout to some great causes as well! 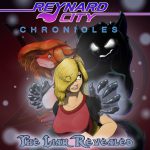 We created Sassy, the Startup Superhero as a mascot (Artwork by Dedoarts) for Baobab Marketing (more info http://baobabmarketing.co.uk/)

Special foxy thanks to Visualise for our awesome website

Special thanks to Hubfizz for their support

All The Fun of the Fair cover by Dan Butcher

Find out more and see more of her fantastic work at www.natalieknowlesart.com